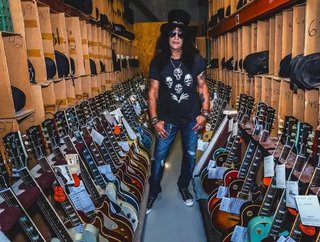 Gibson Brands, one of the best-known musical instrument manufacturers in the world, has announced that for the first time in its history, it has appoint...

Gibson Brands, one of the best-known musical instrument manufacturers in the world, has announced that for the first time in its history, it has appointed an official Global Brand Ambassador.

Slash, best known as the lead guitarist of Guns N’ Roses, will take on this role, developing new products with three of the most famous guitar brands: Gibson Custom, Gibson, and Epiphone. These products, together with exclusive content, will be announced in more detail later this month.

A Gibson fan himself, "Slash embodies the characteristics of creativity, passion and excellence that are so closely aligned with Gibson and we are very proud of the friendship and mutual success we have shared together for over 30 years,” said Henry Juszkiewicz, Chairman and CEO of Gibson Brands. “We are also very excited about the future products we will be announcing soon."

Some of Slash’s most iconic riffs and solos were made with Gibson guitars, notably on 1987’s Appetite for Destruction, one of the best-selling rock albums of all time. He has worked closely with Juszkiewicz at various points over the last three decades.

"It's an honour to be Gibson's first Global Brand Ambassador," said Slash. "I've been working with Gibson since the early days of my professional career and playing Gibson guitars since before that. I'm proud of the creative relationship we've developed over the years."

Slash is currently on tour with Guns N’ Roses. Details of his expanded partnership with Gibson will be announced throughout the remainder of 2017.