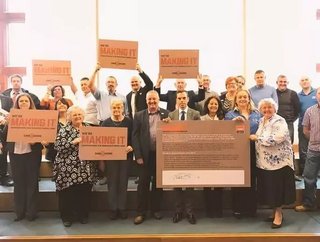 GMB, the UK’s worker union, has received the support of Welsh government minister Ken Skates – Cabinet Secretary for Economy and Infrastructure and...

GMB, the UK’s worker union, has received the support of Welsh government minister Ken Skates – Cabinet Secretary for Economy and Infrastructure and Transport – backing its ‘Making It’ campaign.

GMB aims to challenge the common misconception that British manufacturing is in decline with its campaign, and Skates has signed a charter backing the campaign at a manufacturing roadshow in Pierhead. Manufacturing employers and GMB representatives were in attendance, along with the Cabinet Secretary and other AM’s.

As well as its quest to challenge perceptions, GMB’s campaign outlines its strategy for the industry moving forward, highlighting key issues it believes need to be solved for manufacturing to become ever more successful. Currently, 142,000 people in Wales are employed by the manufacturing sector, which is worth £9bn a year to the nation’s economy.

At a time when many lines are work are less secure and the so-called ‘gig economy’ is growing, manufacturing workers are typically skilled employees who enjoy full-time employment on more permanent contracts. Their wages are also around 20% higher than in the wider economy, on average.

Jude Brimble, GMB National Secretary for Manufacturing, said: “We held a very successful ‘Making It’ roadshow in Cardiff and it was really important for us to hear from both GMB activists and industry experts alike.

“I want to thank Ken Skates AM for signing up and supporting the campaign in Wales.

“It’s so important that Governments positively support UK manufacturing if we are to secure a robust and healthy economy.

“He offered a real insight into how Welsh Labour is driving investment, attracting companies and creating new high skilled jobs.

“We think that there are real opportunities that Wales could benefit from by companies competing on quality, innovation and skills and the importance of maintaining the strong social partnership between trade unions, industry and Government.”

Mervyn Bennett, GMB Wales & South West Head of Manufacturing, added: “We’re calling upon all political parties across the UK to invest in the manufacturing industry by creating more apprenticeship, improvements in training in vital skills.

“GMB will now be looking to build the campaign, with our manufacturing activists, and will be engaging further with the Welsh Government to make sure Welsh manufacturing delivers quality jobs and opportunities for workers”.