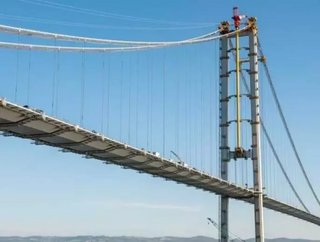 ArcelorMittel Galati has supplied 34,000 tonnes of steel for one of the world&#39;s longest bridges, the Osman Gazi Bridge in Turkey. It opened to users...

ArcelorMittel Galati has supplied 34,000 tonnes of steel for one of the world's longest bridges, the Osman Gazi Bridge in Turkey. It opened to users last week, and cuts travel time between Istanbul and Izmir from nine hours to 3.5.

ArcelorMittal Galati in Romania supplied client Çimtaş with flat steel for the bridge’s horizontal deck. The massive volumes of steel were shipped in four main lots, in a wide range and variety of thicknesses and widths.

Bruno Ribo, CEO of ArcelorMittal Flat Europe, said: “This project has a special importance for us, given its size. Our Galati heavy plates mill facilities produce and supply the requested plates for various applications. For the Osman Gazi Bridge, we designed a series of bespoke technical and commercial solutions”.

The bridge, which connects both sides of the Bay of Izmit in northwest Turkey, is part of a 420 kilometre highway project that shortens the distance between Istanbul and Izmir by about 140 kilometres. The $9 billion bridge project was awarded to a Turkish-Italian consortium, NOMAYG, which will also operate the bridge for 23 years. The consortium awarded the bridge construction on an EPC basis to Japan’s IHI Corporation. Çimtaş was selected as the sole fabricator of both the suspension bridge’s orthotropic steel deck panels and steel tower blocks. The bridge was designed by Danish engineering design firm Cowi.

With a total length of 2,682m and a main span of 1,550m between its steel towers, Osman Gazi Bridge is the longest suspension bridge in Turkey, the second longest in Europe, and the fourth longest in the world.