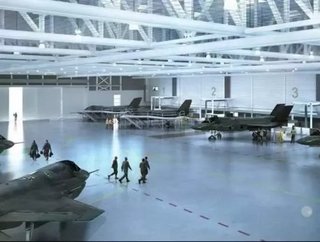 Balfour Beatty, the international infrastructure group, has been selected by BAE Systems, a leading global defence company, to deliver an &pound;82.5m c...

Balfour Beatty, the international infrastructure group, has been selected by BAE Systems, a leading global defence company, to deliver an £82.5m contract to build engineering and training facilities at RAF Marham in Norfolk, in readiness for the arrival of the UK’s first F-35 Lightning II aircraft in 2018.

In March 2013, the Secretary of State for Defence confirmed that RAF Marham would become the main operating station for the UK’s fleet of F-35 Lightning II jets.

Balfour Beatty will construct three new facilities on behalf of BAE Systems to support the arrival of the F-35 Lightning II aircraft in 2018, these are:

Balfour Beatty will utilise digital tools including 4D modelling and BIM throughout construction of the 25,000m2 of technical accommodation across three individual sites on the base.

Dean Banks, Balfour Beatty Managing Director UK Construction Services, said: “We are committed to making this exciting development a success and extending the excellent track record BAE Systems and Balfour Beatty have for delivering defence projects in the UK.

“Our proven expertise in defence and aviation means that we have developed technically advanced delivery solutions that will help to ensure that RAF Marham’s operational capability is maintained throughout our construction activities on base.”

Balfour Beatty has worked closely with BAE Systems, its customer Lockheed Martin, the UK Ministry of Defence’s Lightning Project Team and RAF Marham over the past six months as a Preferred Supplier to prepare for the construction project.

This project builds on the existing experience that Balfour Beatty has of delivering highly complex and technically challenging projects for the UK MoD on live operational bases.

Balfour Beatty is dedicated to providing sustainable benefits to the local communities in which it operates and has planned to channel a minimum of £25m of project spend via SMEs. As members of The 5% Club, Balfour Beatty will ensure that the project generates opportunities for 15 apprentices, three graduate trainees and a further three work placements for students. The project will see 300 construction workers employed at peak.

Works are scheduled to commence on the project in April 2016 with completion scheduled for summer 2018, ready for the arrival of the F-35 Lightning II fleet in 2018.