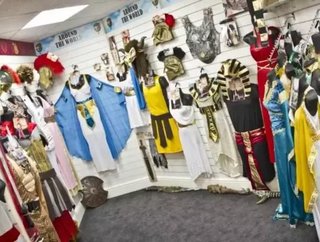 If youve ever stepped foot in a fancy dress shop, Smiffys is a brand you will be familiar with. Operating under the umbrella of parent company R H Smith...

If you’ve ever stepped foot in a fancy dress shop, Smiffys is a brand you will be familiar with. Operating under the umbrella of parent company R H Smith, established in 1894, Smiffys supplies costumes, wigs, and accessories across the UK and Europe, and Director Dominique Peckett fell into this family business almost by accident.

“It was never really planned,” she says. “I finished university and my plan was to go into political research, but my father asked me to join what was then a very small business, and I loved it. It’s something I have a real passion for.”

Peckett works closely alongside her brother and father, which “sometimes makes for interesting board meetings, but we understand each other’s strengths and maintain an understanding that wouldn’t necessarily be achieved with colleagues who aren’t flesh and blood”.

R H Smith is very proud of being a family-orientated company. Peckett’s father had recognised at an early stage that there was previously no brand for fancy dress, and he set about establishing Smiffys to fill that gap. The company understands that, while still a niche industry, fancy dress has changed with the times. The concept of costume parties in the Western world began with 18th century masked balls, which maintained their novelty through the years. Now, the industry is more popular than ever: “The fancy dress industry has expanded dramatically. Halloween has become a lot more prevalent, and so many more people celebrate it. Virtually every supermarket and pound shop sells Halloween-related products now, and not just costumes, but snacks and decorations too. It has helped the fancy dress industry’s growth and customers’ access to it.”

The company has a Leeds-based team of 15 designers who undertake trend research to keep Smiffys products on top. They look at what’s previewing on catwalks and on the high street, what films and franchises are emerging, and brainstorm concepts before selecting 300 or 400 new product designs for release. “We don’t hold licences for big franchises, but we are affected by films. A big trend not long ago was vampires, and now with big series like The Walking Dead, it’s all about zombies. Day of The Dead has also had a huge spike of interest, thanks to a particular scene in Spectre. We’re very much influenced by popular culture.”

Large corporations selling licensed products, such as Disney, are the biggest competitors for Smiffys, and as such become the target for imitators. However, the pursuit for cheaper versions of expensive brands leads to counterfeit issues, and Smiffys has its market cornered as a trusted business: “People are now copying products and importing them straight from China. We’ve done some press releases about counterfeiting and were recently on Fake Britain – a consumer rights TV show in the UK – talking about issues of safety around such items.”

“Brand is something we’ve spent years building up in terms of awareness. Consumers trust brands. We try really hard to impart our values. We’re very ethical in the way that we trade and invest heavily in trying to exceed safety compliance, especially in children’s costumes.”

All of Smiffys’ manufacturing is done in China, operating within 15 key factories, some of which it has been trading with for 20 years. The costumes and wigs continue to be made by hand to ensure high standards are adhered to, and third parties are sent in to perform spot checks periodically. Smiffys’ wigs used to be made in the UK, but with other developments in the industry has come issues of cost: “It’s become more about price. Unfortunately – inevitably – it means that consumers are chasing a cheaper price, so the manufacturing has to go to cheaper areas.”

In the UK, fancy dress is a year-round business. While it may spike over Halloween, Brits will grasp at any excuse to dress up: pub sports matches, hen and stag weekends, birthday parties, Sports Relief, and major holidays are all reasons to celebrate. Thanks to the slow but steady popularisation of Halloween in Europe, along with carnival season, Smiffys has since become popular in Germany, France, Spain, Sweden, Denmark, and many other European nations. “Our export sales have really gathered apace over the last few years and that’s something that we’ll continue to focus on – maintaining brand awareness in the UK and in the export market.”

Remarkably, Smiffys has managed to maintain its positive brand image without the benefit of an online presence: “Until recently you would have to buy from an intermediary. We’ve launched an online platform, smiffys.com, which will allow us to reach consumers, get feedback, and engage with people to better understand their needs. We still support our intermediaries, but in this day and age it’s very rare for a brand to not have direct access to the consumer. A lot of people still like to research online before going to the physical shop. It allows them to see the full breadth and range of our products, which bodes well for the future of the business.”