How collaborative robotics are stimulating innovation in the manufacturing sector 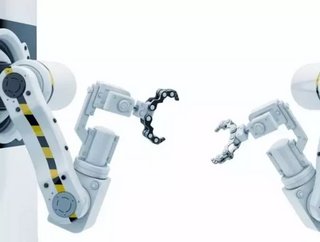 Industrial robots are on the verge of revolutionizing manufacturing. As they become smarter, faster and cheaper, they are becoming used more frequently...

Industrial robots are on the verge of revolutionizing manufacturing. As they become smarter, faster and cheaper, they are becoming used more frequently to carry out ‘human’ tasks.

Up until very recently, robotics in the sector have been used predominantly to carry out repetitive, onerous and dangerous tasks such as welding and materials handling. However technological advancements have paved the way to allow robots to take on human-like capabilities and traits such as sensing, dexterity, memory, trainability and object recognition. As a result, robots are taking over more jobs such as picking and packaging, testing and inspecting products or assembling minute electronics. In addition a new generation of collaborative robots usher in an era, which will see robots work side-by-side with human operators who train them through physical demonstration.

The viability of these robots has increased dramatically in recent years, with technological advancement making it possible from a physical standpoint and costing making it feasible from a financial perspective. The cost of robots has fallen from several thousands of dollars to several hundreds, and at the same time their applications have widened meaning industries beyond automotive and food and beverage are adding them to their ranks. One major robotics company refers to the new generation of robots as intelligent industrial work assistants.

The ‘R’ generation: The rise of robotics

As it stands, there are approximately 1.5 million robots in situ across the globe, with more than 230,000 in the US alone. According to the International Federation of Robots (IFR) in 2013 global shipments reached in the region of 180,000 – an all time high – with 200,000 forecasted for 2014. Further, robots have also attracted the attention of investors such as recent high-profile pure-play robotics investments by Google and Amazon. In fact, venture capital in robotics technology has surged in recent years, according to data from Thomson Reuters.

The maturing ‘R’ generation certainly has implications for the future of manufacturing. Wider adoption of robots comes at a time when manufacturing companies, both big and small, are under increasing pressure to squeeze even greater productivity from their workforces at reducing costs. Furthermore, wage arbitrage seems less attractive to some manufacturing hubs such as China compared to a decade ago. With this in mind, broad adoption of robotics could spur greater reshoring of manufacturing from oversees.

Is now the time to hire automated help?

The answer: possibly, yes. Automation in the sector isn’t only going to help reduce cost – the nascent age of ‘nearly human’ robots is driving greater efficiency and has the potential to reduce labor force injuries. In fact, automation is showing signals of changing the way the industrial workforce is composed – even the nature of the jobs themselves.

Manufacturers are also recognizing that being competitive means injecting greater flexibility into their production lines in order to satisfy consumer demand for products with shorter life cycles and more variety – robots can help on this front as well.

How collaborative robotics can stimulate innovation

The introduction of collaborative robotics to the sector gives manufacturers a lot more choice. For example, robots have the potential to free up and make better use of human resources, which in turn could result in greater innovation across the sector. Conversely, robots could be applied in applications that a human workforce is unable to carry out (such as those of high precision or force) which will open the door to new opportunities of faster and greater production of existing products or indeed new product development.

So the question that remains to be seen is, are robots an economically viable and realistic solution to the increasing difficulty of securing a sustainable manufacturing workforce? And if robots do displace employees, are there plans in place to move those employees to other tasks, which are more interesting and attractive to them and thus more valuable to the company? These question need to be addressed by manufacturing companies looking to implement collaborative robotics into their workforce. Doing away with human employees is not the answer, but redistributing them as a resource could pave the way for a new era of manufacturing innovation and strength.