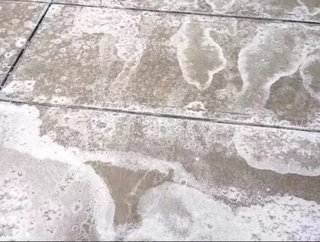 ​A new type of &#39;de-icing&#39; concrete has been created, uning a small electric current which generates enough heat to melt ice and snow from its...

​A new type of 'de-icing' concrete has been created, uning a small electric current which generates enough heat to melt ice and snow from its surface.

Chris Tuan, Professor of Civil Engineering at the University of Nebraska, designed this product for use on surfaces where ice may compromise pedestrian and driver safety, such as bridges, intersections, and exit ramps.

The concrete is made with 20 percent steel shavings and carbon particles, allowing conduction of electricty. The downside is that this specialised concrete is twice as expensive as ordinary concrete, costing $300 per cubic yard.

Tuan's invention has been used on a 150 foot bridge in Nebraska since 2002, and has proven consistently successul in the removal of ice and snow.

The product, though around for many years, has been the focus of media attention since the huge storm which has hit the States. However, Tuan stated in an interview with the university that his concrete is not meant to be used on entire roads.

Similarly, researchers in Switzerland are working on a new concrete innovation, to combat the opposite issue: heat. Their product creates tiny pressure release tunnels within the concrete, making it able to withstand up to 1,852 degrees Fahrenheit without serious damage.

A time-lapse video of the de-icing concrete can be seen here.