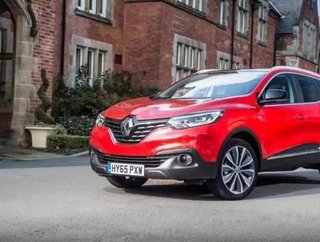 There is an increasing demand for green vehicles, especially when you consider that the infrastructure isnt quite there yet for electric vehicles. Renau...

There is an increasing demand for green vehicles, especially when you consider that the infrastructure isn’t quite there yet for electric vehicles. Renault’s new Kadjar dCi 110 has won best crossover at the Next Green Car awards thanks to its low Co2 emissions of 99g/km and combined mpg of 74.3.

The brand-new family-sized crossover won the environmental prize after overcoming opposition from rivals including the Fiat 500X 1.6 MultiJet II, Honda HR-V 1.6 i-DTEC and Mazda CX-3 1.5 Skyactiv-D. Kadjar was praised by judges thanks to its impressively low emissions for its class.

Since it arrived in the UK in September 2015, Kadjar has strengthened Renault’s presence in the crossover market – building on the success of its compact crossover sibling, the Captur. It is already proving popular with the British car buyers thanks to its striking design, efficient powertrains, spacious interior, high levels of standard specification, best-in-class residual values and five-star Euro NCAP rating.

In the wake of the emissions scandal in Europe and the US, car manufacturers are under increasing pressure to make green vehicles. With competition from electric car makers, those still making regular cars need to make the engines as efficient as possible to satisfy the growing need for environmentally friendly vehicles.

Manufacturers all over the world are upping their green productivity and converting factories to be able to handle the manufacture of electric and hybrid vehicles.