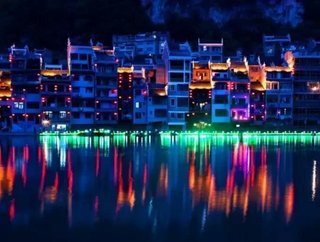 Guizhou is currently one of Chinas poorest and least developed nations. But it also boasts an environment so pristine that President Xi Jinping recently...

Guizhou is currently one of China’s poorest and least developed nations. But it also boasts an environment so pristine that President Xi Jinping recently joked that the region’s air should be bottled.

As a result, Taiwan’s Foxconn Technology Group, the world’s largest consumer electronics producer that employs more than a million workers in 30 industrial parks across China, has set its sight on the gorgeous expanse of Guizhou.

Foxconn, the maker of Apple’s iPad and iPhone and Hewlett-Packard servers, is building an industrial park in China’s southwest, a far cry from its massive Shenzen manufacturing base.  The company aims for the park to be state of the art in energy efficiency and environmental friendliness.  Set among karst hills on the outskirts of provincial capital Guiyang, the 500-acre park will keep roughly 70 percent of the natural vegetation undisturbed.

The park will produce smartphones and big-screen TV’s as well as house a 130,000 square meter research and development center and a 2,160 square meter big data center, all while remaining eco-friendly.  By March of 2015, the park will employ 12,000 workers and have an annual output of 35 billion yuan ($5.6 billion) according to the company’s projections.  In 2018, it plans to more than triple in acreage to employ 50,000 workers and reach 50 billion yuan in sales.

The gem in its green cost-savings model is the use of a north-south wind tunnel, already bored through one of the area’s hills.  The tunnel will cool the 12 containers of servers in Foxconn’s big data project.  Generally, 35 percent of the energy consumed to run servers goes towards air conditioners for cooling.  Foxconn aims to reduce that portion to a mere ten percent by using wind to blow over its servers and dissipate the heat they generate.

Speaking at a recent forum on environmental protection in Guiyang, Foxconn founder and CEO Terry Gou commented on the plans by saying, “We have succeeded in leveraging technology to enhance all aspects of manufacturing, and we are focusing our investments in areas that link technology with sustainable economic growth in a way that also protects the environment.”

Construction will include close to 100 percent recycled steel in the zone’s buildings.  In order to reduce energy use while operating, the company will install its own patented heat-reflective laminated glass for all windows.  For outdoor lighting, it will install “intelligent” street lamps of its own design, which rely on solar panels for energy and are equipped with sensors that are able to determine traffic load and weather conditions and can adjust the strength of the light to eliminate unnecessary usage.

The company has also taken steps to change how its smartphones will be manufactured in the region, with a focus on cutting energy and water use as well as reducing the paint and chemicals needed in production.  Foxconn will use a special mold process that ensures that less than one percent of the paint is wasted, significantly reducing the amount of chemical fumes released into the air.  Additionally, they will replace the traditional film used in smartphone screens with a new carbon nanotube film that requires 80 percent less energy to produce and cuts water use to near zero.

Like many manufacturers, Foxconn is facing pressure from its customers to ensure that its production process has fewer environmental costs.  At a press conference held earlier this month in Guiyang, Gou stated, “In the past, people thought being green would increase costs or lower efficiency. That is not the case. This industrial park represents a new model for growth: green and responsible.”