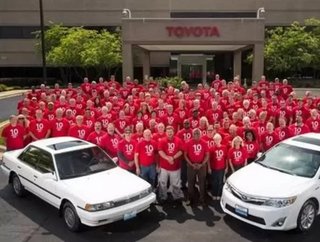 Toyota has announced that it will begin production of its Lexus ES350 model at its anniversary-celebrating Motor Manufacturing Plant in Kentucky.Located...

Toyota has announced that it will begin production of its Lexus ES350 model at its anniversary-celebrating Motor Manufacturing Plant in Kentucky.

Located in Georgetown, the anniversary in question was for the 10 millionth vehicle to roll off its assembly line over the past 16 years, to which 7,000 employees raised a well-earned glass at the end of May.

The 10 millionth car was also the first, one of Toyota’s renowned Camry’s, but the company also took the opportunity to reveal the next stage of the plant’s future.

The celebration has come as sweet respite to some of the employees at the plant, some of which having been told they would be moved out of the area as part of a consolidation plant.

However, for the plant itself, there certainly won’t be any consolidation in terms of production or investment.

Plant President, Wil James said: “Obviously, these two vehicles [the first and 10 millionth Camry] are worlds apart in many ways, but, at the same time, identical in others, particularly when it comes to craftsmanship and the care and love that went into their production.”

Kentucky Gov. Steve Beshear added: “I was lieutenant governor when Toyota came to Kentucky in 1986, and, over the years, it has been incredible to watch and assist in the growth that has taken place.

“This plant now has 7,000 team members, and we look forward to continued growth with 750 jobs being added when production starts for the first U.S.-assembled Lexus next year.”