View Full Report
David Ginsberg just completed the electronics industry’s first end-to-end digital supply chain. Now he wants to show other companies how to do it

‘Sonic serves virtually every industry in Silicon Valley,’ David Ginsberg, VP of Supply Chain for Sonic Manufacturing Technologies, tells me. ‘Medical, military, aerospace, consumer, industrial sensors, entertainment systems, automotive, drones...you name it, we’ve probably got it in the building.’ Sonic is the largest electronics manufacturing service (EMS) in the Valley. To put that into perspective, Ginsberg’s team manages about 30,000 part numbers annually and procures a million parts per week.

But what we’re here to talk to David about today is the first digital supply chain in the electronics industry. ‘This has been a roughly 20-year project,’ he says. ‘Before we even started calling it a digital supply chain, many of us were frustrated that data quality never kept up with the real world. You were constantly fighting your own bad data on top of normal business delays. So we started working on the problem early on.’

The Start of the Digital Supply Chain

Much of that is based on transactions. For each transaction in the supply chain, whether it’s planning data, creating purchase orders, receiving confirmations, receiving tracking and shipping information, or invoicing, Sonic automates it. ‘This way, you end up with a digital supply chain that no longer needs human touch,’ says David. ‘Those people are then free to move on to higher-value activities while the computer does the routine, repetitive work.’

Suppliers and customers previously used electronic data interchange (EDI) as a point-to-point connection. Essentially, EDI allowed companies to send information to each other in a standard digital format. But it was expensive to set up and clunky to communicate. ‘You’d push transactions to each other, but if you faced an exception—any unexpected deviation from the planning data—it was almost impossible to respond,’ David explains.

That’s when the marketplace started to change. ‘Companies like Amazon or Bank of America could write one API, own the code, and have a million customers download it,’ David says. ‘It’s no longer point-to-point, and you definitely don’t have the problems of scale’. You could simply download the API in an app and start shopping.

That’s when Sonic started to talk to its major suppliers. ‘We took our clean data, flew around the country, and said—”This is the way to go”,’ David tells me. ‘We were the first API customer for many of our North American distributors.’ To make this work, it was clear that Sonic couldn’t use a keyboard to fix a million dynamically changing records. ‘We invented a lot of our own scripts and business processes,’ David says. ‘And we built it all into the system over a couple of decades.’

How Does It Work?

Let’s imagine that you want to build a single car. At this point, you need one engine, two doors, and four tyres. Your materials requirements planning engine (MRP) says that you have one tire in stock and need to buy three more. Instead of having a buyer make inquiries, you can send over an API request for price and availability. How many do you have in stock? What are the price points for one, a hundred, or a thousand? What’s the lead time to get more? By doing so, your automated system can confirm price and availability in advance of issuing a purchase order.

The current market conditions of shortages and allocations in the semiconductor industry turned out to be the perfect fit for such a solution. ‘You have extended lead times and minimal inventories,’ David explains. ‘Nothing moves better through this market than a digital supply chain.’ Machines can source and order scarce parts from suppliers much faster than humans. ‘You have a computer running 24 hours a day,’ David says, ‘while your competitors check in once or twice a day during business hours.’ For COVID-19-induced constraints, automation wins the race.

Rather than reducing labour, in fact, digital supply chains repurpose labour to focus on what’s important. For example, in electronics supply chains, that’s often those last, critical parts needed to finish the product. ‘If I bring 99 out of a hundred parts for the product into the building,’ David says, ‘the clock starts to tick. I have to pay someone. I have to tie up the stockroom space. So it’s kind of pointless to brag about half my deliveries arriving in three days if the last part comes in three months. Because only when that last part arrives can I build, ship, and invoice. APIs take people off of routine repetitive ordering and give them time and circumstance to become exception managers and problem solvers. Job satisfaction improves, performance improves.’

When it comes to the benefits of a digital supply chain, the most obvious one is that neither party has to perform the dreaded data entry. If you have a 10-line purchase order, for example, your buyer has to type in all 10 entries. They’d then send it to a supplier who would repeat the process. ‘As soon as you go digital and have your computer buy from their computer,’ David says, ‘there’s a true win-win. Your people can now focus on exceptions rather than the “we’ve got to get a thousand parts on order” grunt work.’

For Sonic, which orders about a million parts per week, using an autonomous digital supply chain was the answer. ‘If I run my MRP (Materials Requirements Planning Process) on Monday, within three to five minutes, over half my workload for the week will be on order, with a median delivery of three days, typically. That’s 500,000 parts on my dock by Wednesday.’ He adds: ‘Automation just moves faster than humans.’

With a digital supply chain, Sonic can simply take a supplier’s own data, stick a purchase order (PO) number on it, and hand it back to them. ‘By definition, that yields a near 100% accurate purchase order,’ David says. Forget the humans—prone to typos, delays, conflicting priorities and time off. ‘Some distributors tell us that EDI has maybe a 70% success rate. That means you’re rejecting 30% of orders, and resolving them through manual calls and emails. API accuracy is above 99%.’

And while some say that computers will eliminate any personal bond between companies and suppliers, David argues that it actually strengthens the connection. ‘I’m no longer calling you once a week to repeat orders for parts we negotiated months ago,’ he says. ‘I’ll take 100 next week. Fifty-one the week after that. Come on! Routine, boring, uninspiring. But if the computer is working in the background then the relationships are focused on problem-solving. You’re out of stock for a week. How do you work together to fix it?’

What About the Humans?

First of all, a digital supply chain will never be 100% digital. ‘You’ll always manage late packages,’ David says. ‘You’ll always deal with constrained capacities with suppliers. But that’s where the relationship part comes in. Supply chains are half math, half business relationships. So you have the people focus on building connections and allow the computer to take care of the rest. It’s really the best of both worlds.’

Automation can also affect how your team members see themselves and their roles. ‘Your entire division transforms to problem-solvers,’ David explains. Once people start to move away from more repetitive tasks, this shift snowballs. ‘They’ll spend their day on resolving tricky problems, and because of that, they’ll get better and better at it over time. When two-thirds of what’s running through your building is completely automated, you have an awful lot of capacity to work on orchestrating the system–keeping it running smoothly.’

Skilled orchestrators will eventually be dual trained in purchasing and programming. ‘I hired a supply chain engineer straight out of college,’ says David.  ‘Her name is Niyati Patel, and she had a background in analytics, SQL, and a strong interest in supply chain. Her job is 50% purchasing and 50% programming. And as a result, she gets to experience life exactly the way buyers do. She runs into the same problems. Then, she can take that frustration and go into the live database and code a solution.’

He emphasises that SQL—and really, just understanding how computer logic is structured—will be a critical skill for anyone working at the core of digital supply chains. ‘We’re not talking about heavy-duty coding here. If you can select, update, add, and delete records, that simple type of programming is excellent.’

Just a month or two back, Sonic finally felt like it could announce that it had the first end-to-end digital supply chain in electronics. ‘The last piece was a change order process,’ David says. ‘With that, we finished automating end-to-end, from planning to invoicing. From the start, Sonic had relied on several key partnerships within the industry. ‘While we knew our data and our transactions and our business goals better than anyone, we needed outside help in literally linking to our suppliers,’ he adds. ‘So we partnered with Orbweaver—huge in the electronics and distribution space and a great fit. I managed the data within our four walls, and they transformed and shared it with our suppliers.’

Sonic’s first partner was Digi-Key, a leader in bringing new APIs to market, and soon after, Mouser. ‘They’ve seen the same benefits,’ David says. ‘I can place over 30,000 line-items a year between them. If you’re thinking about doing that by hand’—he pauses—’I’ll send it over to you, and you tell me how long it takes for you to get through that stack.’ He smiles. ‘Our accounting department wasn’t happy processing 30,000-invoice lines either. So we automated that one. Now we are connected to most of the North American electronics distributors.’

But why is Sonic, a company admittedly ahead of the digital supply chain curve, sharing secrets? Letting the world in on how to compete? David tells us. ‘First, we’ve put in so much time that we can protect our edge,’ he says. ‘More importantly, billion-dollar companies won’t make new APIs if Sonic is the only one pushing for them. But if all of Sonic’s peers and competitors want these APIs, they’ll be developed. They’ll be more feature-rich. New capabilities will come out. Sonic benefits from this collective transformation.’

Just as Sonic had to wait for the industry to transition from EDI to APIs in order to build its digital supply chain, David now needs more API features to automate and integrate even further. ‘We need to get the word out there that the time for digital supply chains has arrived,’ he tells me. ‘Our large suppliers are telling us that the demand for APIs in the marketplace is growing almost exponentially.’

Now, what David wants is for the electronics and supply chain community to get on board. He wants suppliers to hear that a hundred large customers want to build digital supply chains so that they invest time and talent in providing APIs. ‘We need others saying that this method saves money,’ he says. ‘That it’s a lot more accurate. That there’s nothing faster. If we all ask for the same thing, we’re going to get it. 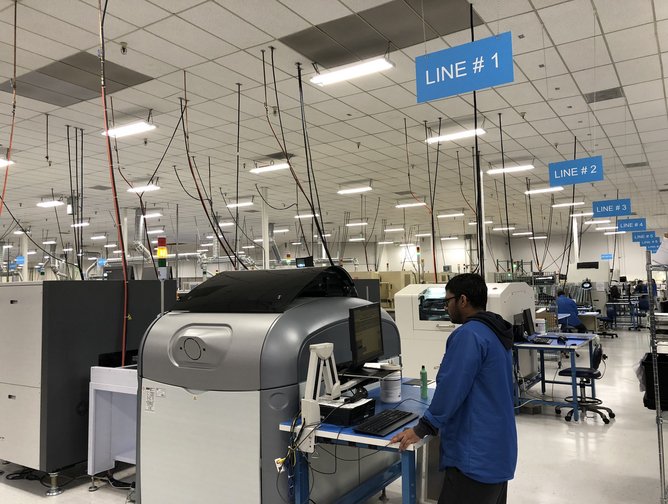 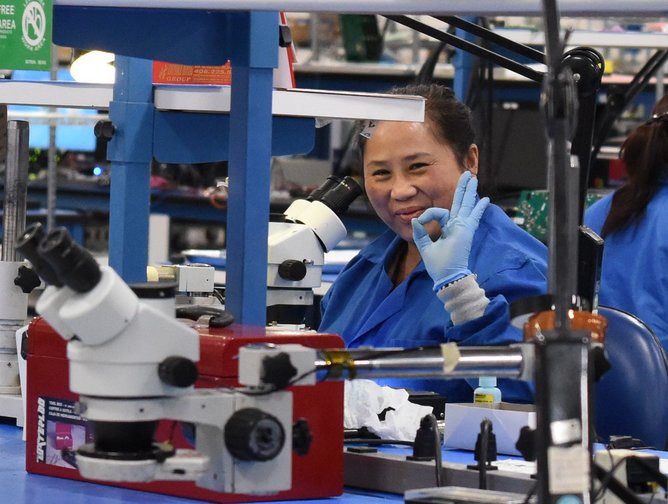