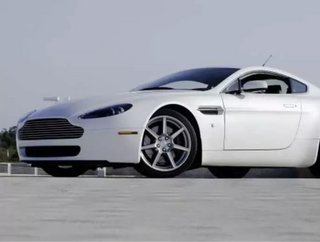 Design departments within all manufacturers continually seek ways to improve their in-house design process. The design team at Aston Martin has discovered that cutting-edge design and 3D printing tools are not only extremely enabling, but also save time.

Celebrating its 100th anniversary this year, Aston Martin is an iconic British automotive brand. With its headquarters in Gaydon, Warwickshire, it has transformed from a small-scale manufacturer of specialist sports cars to a renowned luxury automotive marquee.

Aston Martin boasts a very impressive model range – including the Vanquish, DB9 and One-77 supercar – all of which express the brand's core values of power, beauty and soul.

Housed within a state-of-the-art design studio, opened in 2007, is Aston Martin's design team. This niche and highly flexible team consists of 50 members across a range of disciplines. Although each has their own role to play within the design process, they are by no means tunneled towards one particular aspect.

For instance, individuals in the sculpting and digital teams will readily collaborate around a 3D model on a computer screen drawing on one another's skills and expertise. The creative and production teams within the Aston Martin Design Digital Group studio were previously using separate CAS tools.

By working so closely together and often on each other's models however, it made sense to standardise to one tool, Autodesk Alias. This has resulted in a seamless flow of surfaces all the way from the designer's initial sketch to production. It has not only accelerated the design process, but has also greatly improved efficiencies.

Art to part with realism

A mantra often heard within the Digital Group at the Aston Martin Design Studio is 'from art to part with realism'. This phrase captures a very detailed design process, but helps to explain how a design goes from being inside the designer's head to realistically visualised on the computer screen.

That same design data is then used to prototype a part through the use of advanced 3D printing technologies, whether it's a small-scale part printed in-house or a full-scale component such as an entire deck lid printed through a bureau.

From the first sketch at the start of the design process – produced digitally on a Wacom tablet or imported from paper into Autodesk Alias – through to digital validation on the computer screen and then physical validation with a prototype part, all members of the team play a role in approving the design. This means that any issues can be spotted immediately preventing costly changes further down the line in the tooling and manufacturing stages.

An example of this is the design of a wheel. Previously, it would be sculpted by hand. This process could take up to six months before a one-off wheel design was up to the standard where the geometry could be sent to the engineering department. Today, the designer only has to draw a segment of the wheel on a Wacom tablet and Alias will mimic that section all the way round the wheel.

That data can then be used to produce a photo-realistic visualisation to share with others in the team and can also be sent to the 3D printing machine to produce a prototype. This means that literally the design can go from 'art' one day to 'part' the very next.

Similarly, the design team recently had to create a new deck lid for one of the cars when the aero changed following the installation of a new engine. This new deck lid with larger tail flip was designed in Alias and tested aerodynamically in the software before a full-scale part was rapid-prototyped and metallised.

It was then fitted to the car and taken to the race track to be tested. This was all carried out within two weeks of releasing the design data.

For the Aston Martin design team there is no question that all this technology is incredibly enabling. In design review meetings, designers can now sketch quick ideas straight into the Autodesk SketchBook Pro app on their iPads.

This design tool will also automatically mirror the lines and curves on one half of the car to the other.

The resulting 2D sketch can be imported straight into Autodesk Alias with no misinterpretation of the designer's intent along the way.

Aston Martin has recently installed a large screen, high definition projector coupled with surround sound into a room where designers, as well as other members in the organisation can come together and interact digitally with the designs.

Through photorealistic visualisations and animations, the latest automotive models or concept designs can be fully experienced before they reach production. Aston Martin's design team embraces and readily invests in advanced technologies.

This desire to drive forward is fuelled by the passion the designers and the company as a whole have for the beautiful cars they produce. As the brand now enters its second century, Aston Martin continues to honour its rich heritage while pushing new boundaries.