Audi vs. Google: Who will win the driverless race? 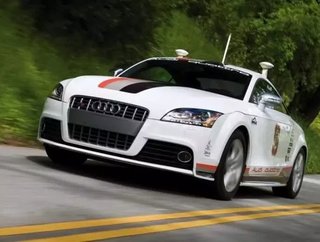 Driverless cars have become synonymous with Google. The Internet behemoth has been developing autonomous vehicles since 2005 and in 2014 launched its la...

Driverless cars have become synonymous with Google. The Internet behemoth has been developing autonomous vehicles since 2005 and in 2014 launched its latest prototype, which had neither steering wheels nor pedals. Google seemed to be leading the sector; however in the last month car manufacturer Audi has taken strides that could see it overtake the technology giant.

On Tuesday 23rd September, Audi announced that it had become the first automaker to receive a permit from the state government to test self-driving cars on California’s public roads. Audi’s permit was granted under state regulations that went into effect the same day. Does this mean the luxury German brand could overtake Google and become the first manufacturer of a vehicle that can drive itself? Yes and no, said John Rosevear, writing for Motley Fool, “Audi and Google aren’t really playing the same game. Google's self-driving experiments are a fascinating side venture for a famously smart company, but Audi's efforts are grimly serious,” he says

Google’s vision is one focused very much on the future of driving - a future in which road traffic accidents and congestion become much less common. Its latest prototype is small and bug-like vehicle with no pedals or even a steering wheel – it’s a totally new concept for driving. On the flip side Audi is focused more on creating a self-driving vehicle that looks very much like its current models - its end goal being to outpace the competition by introducing self-drive elements, rather then utterly disrupt the sector.

So who is more likely to win the driverless race?

In truth, the first driverless car to come to market will probably look very different from Google’s prototype and more like the vehicles we are used to seeing on our roads daily already. Like many of the technological advances that have been introduced to the automotive manufacturing sector in the past, the battle over self-driving cars will most likely play out in the luxury car market. Before we see a fully autonomous vehicle hit our roads, we will see driverless features added to luxury vehicles already in existence.

In fact, driverless feature are already making an appearance. Many automakers have already introduced features that incorporate technology developed as part of the research into self-driving cars. They include systems that help guide you into tight parking spaces, keep you at a set distance from other cars on the highway, and warn you if you're about to hit an unseen object.

Last year, Mercedes-Benz went even further, introducing the first car that can drive itself, if only occasionally. The new-for-2014 Mercedes-Benz S-Class sedan includes a suite of features called ‘Intelligent Drive’. Under certain limited conditions - stop-and-go highway traffic, for instance - the Intelligent Drive system can accelerate, brake, and steer for the driver, up to speeds of 37 mph.

It's far from a true self-driving system - the driver still must pay attention and be ready to take over. However, it's an impressive feature that no other automaker has implemented; in the high-end luxury car market, that matters a lot: U.S. sales of the S-Class are up 107 percent so far this year. No wonder Audi is hoping to win its slice of the sector.

While Google is winning in the PR stakes, it’s the likes of Mercedes that other auto manufacturers are keeping their eyes on. The success of its self-driving features is causing other manufacturers to bring their own autonomous ideas to market.

Earlier this month, General Motors CEO Mary Barra announced that the automaker's ‘Super Cruise’ system would come to market with the 2017 Cadillac, while BMW is expected to bring limited self-driving capabilities to some of its models soon in the form of its ‘ActiveAssist’ system. Nissan has also promised advances self-driving capabilities in the near future. Its latest Q50 sedan already includes a feature called ‘Active Lane Control’, which can briefly take control of the car's steering to nudge it back on course if you drift out of your lane on the highway.

In short, Audi’s latest move is not designed to beat Google when it comes to developing a new way of driving, but is about keeping up with and likely surpassing other luxury automakers attempts to make steps in the field.

Google doesn’t need to be worried. Its bold ideas and fierce ambition set it head and shoulders above the rest when it comes to product development and disrupting the status quo.