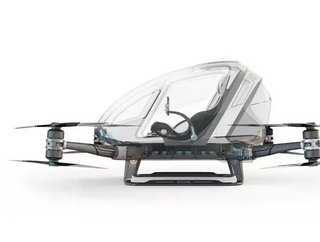 The manufacturing of the EHANG 184 “drone taxi” has reached the manned trial stage. The Chinese aerial vehicle manufacturer, EHANG, has developed a...

The manufacturing of the EHANG 184 “drone taxi” has reached the manned trial stage.

The Chinese aerial vehicle manufacturer, EHANG, has developed a mode of transport similar in design to a quad-copter drone, but larger enough to fit a single passenger.

However, this passenger does not need to pilot the aircraft as it runs autonomously.

The dubbed drone taxi runs off electric batteries and can fly for up to an hour using its eight propellers.

When the drone taxi concept was first introduced it was widely regarded as unsafe and unrealistic.

EHANG has developed the technology for years to heighten safety features, such as the addition of remote piloting.

During the trials of the taxi it has transported more than 40 people in a variety of weather conditions.

A member of the drone’s alumni is the Deputy Mayor of Guangzhou.

“Performing manned test flights enables us to demonstrate the safety and stability of our vehicles,” remarked Huazhi Hu, the CEO of EHANG.

“What we’re doing isn’t an extreme sport, so the safety of each passenger always comes first. Now that we’ve successfully tested the Ehang 184, I’m really excited to see what the future holds for us in terms of air mobility.”