Faster Than The Speed Of Sound: Engineering The Worlds Fastest Car 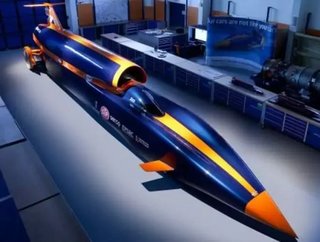 It has four wheels, five if you include the one for steering, a driver rather than a &lsquo;pilot and will be looking to break all kinds of records on l...

It has four wheels, five if you include the one for steering, a driver rather than a ‘pilot’ and will be looking to break all kinds of records on land. However, you’d be forgiven for thinking that Bloodhound SSC has been manufactured more as a plane or rocket ship than a car.

A SuperSonic car to be precise, Bloodhound SSC is edging nearer and nearer to putting years of engineering, design and assembly to the test in the deserts of South Africa, letting loose more than 135,000 horsepower to reach speeds of up to 1,000 mph eventually.

Considering the technical expertise and intricacy that goes into a formula one car, producing a machine that will be harnessing six times the power of every single F1 car on the current grid has required levels of innovation that can only stem from a handpicked, world-revered manufacturing team under the guidance of a man who has pushed the boundaries of speed and engineering more than once before; Richard Noble, OBE.

A new generation of manufacturing

Noble was the land speed record holder for 14 years between 1983 and 1997 before becoming project director of Thrust SSC which later became the first car to achieve supersonic status under the instruction of current Bloodhound SSC driver, Andy Green.

Back in 1997, in Black Rock Desert in the US, Thrust SSC hit speeds of 763 mph, nearly 250 mph less than he and his team are trying to now coerce out of the current Bloodhound project.

“The project is on schedule and on budget which is amazing,” Noble said at this year’s MACH event in Birmingham, UK. The Project Director helped open the exhibition which is appropriately growing to become one of the leading events in manufacturing and technological innovation, and the potentially record breaking car was one of the main attractions in 2014.

“We’re working towards the first runs in South Africa in 2015 and want the car to reach 800mph,” Noble continued in his event-opening speech. “We’re trying to encourage the next generation to really understand what manufacturing is and the excitement and challenge and the thrill of manufacturing.”

Putting engineering to the test

The ongoing work being carried out in the Bloodhound Technical Centre in Bristol, UK comprises a unique combination of manufacturing and engineering techniques already refined in previous speed record efforts, with the unknown quantity of trying to reach a speed previously untouched.

Nobody really knows how components and car mechanics will hold up at speeds of 1,000 mph making the importance of virtual testing integral within the constantly adapting manufacturing and design stages.

This requires some of the most modern and advanced techniques being employed including the likes of 3D printing in regards to the design of the steering wheel to 3D CAD drawings to aid with the design.

Special areas of attention being paid during the build of Bloodhound SSC were areas thought to be most vulnerable to the untested conditions of driving so quickly; namely the impact that so much thrust will have, to the extraordinary temperatures being inflicted, to the aerodynamics and the suction caused by cutting through the air at faster than the speed of sound.

All of these factors primarily jeopardise the success of the chassis where much of the technical innovation to overcome these potential issues has been focused.

While virtual testing has been successful, this has included a test in which the carbon rotors on the brakes shattered short of the target 10,000 rpm landmark at temperatures of 1,500 degrees fahranheit, proving that nothing can be left to chance in the final developments before the car takes to the Hakskeenpan desert track in South Africa in the summer of 2015.

This has made some of the recently formed partnerships in the form of Castrol and Rolls Royce all the more pivotal, whether from a manufacturing and technical standpoint or from a promotion and sponsorship perspective.

“We are delighted that Castrol has joined the team,” Noble said in regards to the partnership. “Their brand is synonymous with racing at the highest levels and, of course, with many pioneering achievements in Land Speed Racing.

“I am happy to continue a 30 year relationship with Castrol having worked with them on both Thrust 2 & Thrust SSC projects. They are a great brand and will not only work with us on the technical side, they will help us share this Engineering Adventure with a global audience.”

Castrol will provide high performance lubricants, brake and hydraulic fluids to the project, while Rolls Royce PLC is responsible for the jet powered engine hopefully rocketing the project to record breaking achievements.

The EJ200 jet engine will work in tandem with a custom designed hybrid rocket to propel the vehicle the length of nearly five football pitches per second, its function more traditionally familiar as part of a twin-engined Eurofighter Typhoon combat aircraft.

When it comes to testing in August next year though, every component, both big and small, will be expected to hold up to these unprecedented strains and forces, putting levels of technological innovation and manufacturing excellence through stresses never before seen.

For Noble and his team, however, it wouldn’t be the first time he has rewritten the record books.

“It's important to understand that completion of a car build on this scale is very tough – as the car comes together in the last final months there is a myriad of last minute things that need doing – and of course things do go wrong and the plan takes no account of rework,” he said in his most recent diary on the Bloodhound website.

“..we have a long way to go still. But…the technical issues have solutions, and that is the news we have been waiting for, for six very, very hard years.”