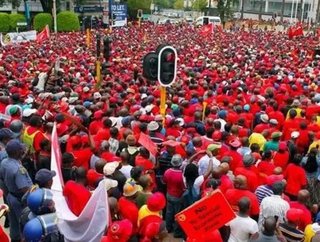 Ford Motor Company has suspended production at one of its South African plants and Japanese car-maker, Toyota plans to follow suit as a manufacturing wo...

Ford Motor Company has suspended production at one of its South African plants and Japanese car-maker, Toyota plans to follow suit as a manufacturing workers' strike hits suppliers of car components.

The two-week-old strike by 220,000 NUMSA union members, who are seeking 12-15 percent annual increases, follows on the heels of a five-month strike in the platinum sector that stunted economic growth and export earnings.

The strike, which has hit the supply of beverage cans made by packaging firm, Nampak has damaged wider investor sentiment in Africa's most advanced economy, which is teetering on the brink of recession after a first-quarter contraction caused in part by the platinum strike.

Ford spokeswoman, Alicia Chetty said: "Production at our Silverton assembly plant has been temporarily suspended due to the strike." She said only the company's Pretoria plant was affected and its other plant in Port Elizabeth was operating normally.

Jeff Nemeth, Ford's South Africa head, told Talk Radio 702 suspension at the plant - which assembles the Ford Ranger pick-up truck - would mean the loss of about 350 units a day.

Nemeth said continued disruptions in the flow of products might affect corporate investment decisions in Africa's most developed but ailing economy.

Toyota said it would halt some production from Tuesday because of supply chain problems related to the stoppage.

The manufacturing strike also forced General Motors to close its assembly plant in the southern city of Port Elizabeth over a week ago, despite efforts by Labour Minister Mildred Oliphant to mediate between the union and employees.