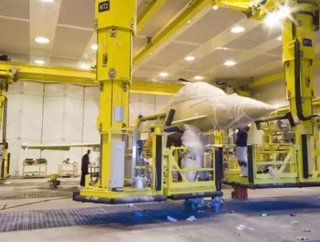 BAE Systems, creator of the worlds most advanced swing role combat aircraft, has partnered with Siemens to create a suite of IT services supporting the...

BAE Systems, creator of the world’s most advanced swing role combat aircraft, has partnered with Siemens to create a suite of IT services supporting the Eurofighter Typhoon.

The Eurofighter Typhoon can achieve supersonic speeds, able to travel the distance between London and Birmingham in six minutes. It has been used for air policing and peace support, and Siemens’s control system includes a bespoke machine tool collision avoidance software programme as well as operational and safety benefits.

Chris Dowson is the Product Specialist of Machine Tool Modernisation at Siemens UK & Ireland, and explained the background to the new control system solution:

“Following a long-standing service relationship with the maintenance team at BAE Systems, we assisted in the appraisal process of the legacy control system used in the spray booth for the Eurofighter Typhoon. We concluded that it was becoming increasingly obsolete which could, in the future, potentially present issues around safety, operational efficiencies and resourcing.

“In particular, we focussed upon the ‘man movers’ – a set of moving platforms controlled by a CNC controller which are used to support the skilled personnel hand spraying the aircraft’s exterior.  BAE Systems wished to identify if there was a solution to minimise any potential for the platforms to inadvertently strike the aircraft during the spraying process. The sprayers are encased in full breathing equipment which impairs visibility and reduces their ability to successfully intervene if the platforms move too close to the aircraft. Any interruption part way through a spray, for example if the platform came into contact with the aircraft’s exterior, would mean the surface would have to be rubbed down again and re-prepared for spraying. In addition, through our discussions we were also able to develop and propose additional enhancements to both the diagnostic and overall process supervision aspects.”

“The new system within the spraying facility provides us with increased capability, flexibility and reliability. One key benefit for us, especially the operators, is the addition of the anti-collision system, this allows the operator to get closer to the aircraft without being concerned they will bump it; they can therefore concentrate on the job in hand.     Furthermore, the system can be easily reprogrammed for use with different aircraft which gives us flexible operational options going forward.”