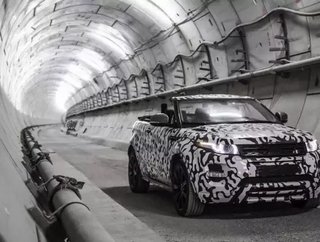 Land Rover has announced plans to produce a convertible model of its highly successful Range Rover Evoque. The Evoque is the companys best-selling vehic...

Land Rover has announced plans to produce a convertible model of its highly successful Range Rover Evoque. The Evoque is the company’s best-selling vehicle to date.

The convertible concept was first launched at the 2012 Geneva Motor Show, and has been highly anticipated ever since. In recent months, speculation has been mounting about when it will eventually go into mass-production.

According to reports, the new vehicle will go on sale in 2016 and Land Rover marked the latest announcement with the release of an underground testing film.

The first prototype of the Evoque Convertible was given exclusive access to the 26-mile network of Crossrail tunnels 40 metres below the streets of London.

The film shows the convertible being lowered into the tunnel network by crane, before negotiating a range of obstacles through the 6.2 metre diameter tunnel.

Murray Dietsch, director of Land Rover Programmes said, “The tunnels are still under construction, so we had a unique opportunity to explore the vehicle’s all-terrain ability in unchartered territory.”

Land Rover will announce further details about the Evoque Convertible later this year. It follows in the footsteps of three and five-door versions of the Evoque premium compact SUV, which has seen the marque’s global sales soar and profits surge.