COVID-19: HOW 3D printing is crucial to GM’s efforts 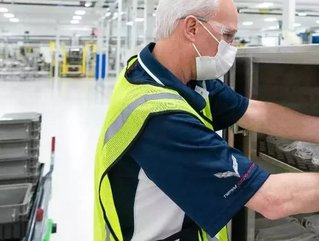 When it comes to 3D printing General Motors details that its typical use of the technology is to help launch new vehicles.

However in recent times, due to the impact of COVID-19, the technology has taken on a new role, playing a vital part in the companies efforts to transition its operations from making vehicles to medical devices. Due to the automotive manufacturers expertise in 3D printing (additive manufacturing) the company was able to quickly shift its core business to medical production.

“3D printing helps us design and build parts and products faster and in ways we previously couldn’t,” said Kevin Quinn, GM director of additive design and manufacturing. “It’s already having a positive impact on how we develop and build vehicles, like Corvette, and it’s allowed us to apply our mass production expertise to medical supplies and devices.”

“We could not have responded to the coronavirus as quickly as we did without 3D printing,” said Ron Daul, GM director of additive manufacturing. “The investment in both our additive manufacturing facilities and training the team to leverage 3D printing for development has enabled us to pivot to making ventilators and personal protective equipment virtually overnight.”

When it comes to the tools required to assemble the ventilators produced by General Motors - with its partner Ventec Life Systems and Hamilton Medical - the company reports that all tools are 3D printed, with most being 3D printed ‘nests’ or fixtures that hold parts in place when being assembled.

“3D printing allows us to make constant, rapid changes to fixtures based on feedback from the assembly teams,” said Dominick Lentine, GM senior manufacturing engineer, additive applications. “We can receive feedback from Hamilton, improve a part and have it flown back to Reno in less than 24 hours.”

Since 1989, General Motors has been using additive manufacturing for rapid prototyping. With its knowledge of 3D printing the company has been able to quickly build and assess different designs and assembly tools, as well as develop and produce face shields for first responders.

By having the capability to quickly deliver prototypes of face shields to local healthcare workers general motors was also able to rapidly make improvements based on feedback prior to producing supplies in large quantities.

Following its prototyping of face shields, General Motors produced over 17,000 for local hospitals. Once perfected the final design was sent to be mass produced using injection molding, since going into full production the company has produced over 250,000 face shields.

To find out more about general motors efforts during the pandemic, click here!