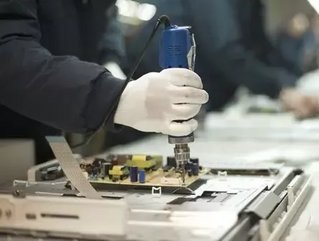 This week in Manufacturing Digital, we looked at reshoring, strengthening supply chains, smart manufacturing and Research and Development

Electronics leader Samsung is ready to grow post-pandemic, with new factories opening up across Europe and Asia.

The trade war between China and the USA has played a role in this, as has the various lockdowns caused by COVID-19.

Offshoring is a business term for when a company sends production to another country, where the workers can be paid for less than those in the company’s own country and where the laws are often less strict on health and safety regulations.

In 1978, China’s economy opened up to the rest of the world and the country later joined the World Trade Organisation in 2001. The resulting shifts made China the manufacturing powerhouse of the world, making everything cheaper than factories from the West.

Reshoring is the opposite of offshoring, when a business brings its manufacturing back from factories abroad.

The UK manufacturing sector makes up 22% of the value of all Research & Development tax expenditure, yet further research from Make UK shows that it is responsible for 64% of all UK research and development (R&D) activity.

According to ForrestBrown, a tax relief consultancy, the R&D tax incentive should be working harder to support the sector.

The third edition of India Inc On The Move (IIOTM) event concluded with praise for India from Scott Wooldridge, President of Rockwell Automation Asia Pacific, who said he thought India would become a ‘global smart manufacturing hub’.

Rockwell Automation is the global leader in industrial automation and digital transformation. The IIOTM event brings experts from across technology and business to discuss India’s role in uplifting smart manufacturing.

Investments in cell manufacturing are anticipated to increase to US$9bn in 2030, according to financial service Icra.

Cells are used in electronics to deliver more power and are necessary for Electric Vehicles to function. As many move from traditional petrol engines to EVs, the need for an efficient  cell supply chain is growing.

Icra is based in Gurgaon, India, was founded in 1991 and advises Indian investment institutions.