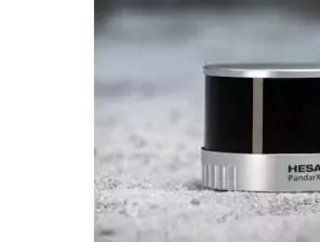 Find out about Hesai’s next-gen LiDAR, the PandarXT, 32-Channel Mid-Range sensor that will revolutionise the costing of autonomous logistics...

Hesai Technology, the global leader in 3D-sensors (LiDAR), has released a new 32-channel mid-range LiDAR, PandarXT; it features a new system architecture which integrates Hesai’s self-developed, industry-leading LiDAR ASICs. The PandarXT is a cost-effective solution designed for multiple applications, including autonomous logistics, robotics, surveying, security, mapping, and low-to-medium-speed driving. The perfect solution for manufacturers and supply chain networks that are looking to evolve into a tech-enhanced utopia.

LiDAR (Light Detection and Ranging) is a remote sensing method that uses light to precisely measure distance. A LiDar sensor rapidly sends out pulses of laser light, which are reflected off surrounding objects. By measuring the time it takes the light to travel to each object and back, the exact distance can be calculated. A LiDAR sends out hundreds of thousands of pulses per second; these measurements are then collected and used to create a £D model of the environment, called a point cloud.

In many situations, sensors do not require ultra-high resolution and ultra-long ranging capabilities; instead, they demand a very precise balance between performance, reliability, and cost. PandarXT was developed with those three factors in mind. Hesai put “extensive R&D work and testing have gone into designing specialised LiDAR ASICs that integrate the functions of dozens of circuit boards.”

The good news for manufacturers is that the new transceiver system streamlines multiple complex optical assembly and adjustment processes into just one process, which reduces the cost and improves performance, reliability, and manufacturing scalability.

“The new system architecture, based on Hesai's self-developed LiDAR ASICs, delivers additional performance enhancements. PandarXT has a minimum range of zero and outputs valid point cloud even when an object directly touches the sensor's enclosure. It also has millimetre-level ranging accuracy and superb precision. Furthermore, its improved reflectivity accuracy and greater dynamic range enable accurate and consistent detection of retroreflectors, low-reflectivity targets, and object boundaries with sudden changes in reflectivity. Consistent with every LiDAR in Hesai's Pandar series, PandarXT has undergone and passed stringent reliability testing to ensure robustness and reliability in any operational environment.”

PandarXT marks a breakthrough in LiDAR system design and its combination of performance, reliability, manufacturing scalability, and cost-effectiveness makes it the optimal choice for LiDAR-powered applications.