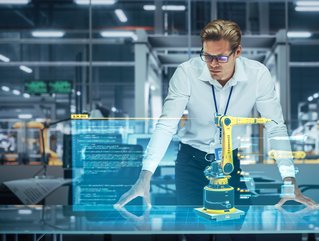 Paul Wellener, Vice Chairman of the US Industrial Products and Construction practice at Deloitte, discusses how manufacturing supply chains are changing

Deloitte recently did a study that was focused on perceptions of talent. The company interviewed parents, asking for their perceptions on manufacturing and whether they would encourage their child to go into the profession. Results showed that, over the past four years, there has been an almost 50% increase in the positive responses given by parents about the manufacturing profession.

Someone helping construct this more positive perception behind the scenes is Paul Wellener, Vice Chairman of the US Industrial Products and Construction practice in Deloitte. He also leads client organisation teams and sits on the board of the National Association of Manufacturers, representing Deloitte.

“An engineer by training, I then got a business degree and started in manufacturing, working in shop floor supervision 30 years ago,” says Wellener. “At that point in time, I was manufacturing parts in the automotive industry, but I moved into consulting a few years later.”

Wellener has been in consulting ever since, though he has remained consulting for manufacturing organisations, whether automotive or aerospace-based. Sitting on the National Association of Manufacturers, Wellener utilises his considerable knowledge – particularly in manufacturing consulting – to represent Deloitte.

“I'm just naturally a person who likes operations and working to see tangible products. In manufacturing, it's so easy to see results day in and day out,” he says. “When you see a product on the assembly line, you can see your impact on it just a few hours – or a few minutes – later.”

Deloitte has made its name in industrial products and construction across the manufacturing business.

Deloitte manufactures a wide range of products and services, as well as offering operations-oriented consulting. Wellener is an expert in technology consulting for different software packages.

This year, Wellener led Deloitte into a study of the manufacturing supply chain, Meeting the Challenge of Supply Chain Disruption, in conjunction with the Manufacturers’ Alliance.

“We surveyed around 200 executives in July who are all supply chain, transportation, logistics, and manufacturing executives, generally oriented around North America,” said Wellener. “We got the results from them as it relates to some of the supply chain challenges that everybody is facing, whether they're in the US or other parts of the world.”

Results showed the very heavy impact from supply chain disruption on all sorts of aspects of business and the frequency of those disruptions increasing.

“Recently, we're seeing some waning in those disruptions, but they're still at higher levels than ever before,” says Wellener. “Over half of the executives stated that their companies have definitely had impacts from a profitability standpoint because of these supply-chain-oriented disruptions. I'd say that's probably some of the key things coming out of the study.”

“Supplier networks are not as broad and robust as they are probably going to become in the future,” says Wellener. “We're seeing a lot of companies now thinking about dual supplies and not just having one supplier, but bringing suppliers closer to the point of production.”

This trend is known as ‘nearshoring’ or ‘onshoring’, but this will mean nothing if the part shortages, transportation challenges and other problems are not solved.

The results generally hit Wellener’s expectations, but he was surprised at how high of an impact labour was.

“We've seen labour shortages, but we were thinking that they were spread like peanut butter across the board and impacting businesses in lots of different areas. Yet, I think we saw an outsized impact on the labour shortages in manufacturing and the supply chain.”

During Wellener’s time at Deloitte, the skills he learned over the past three decades have remained massively relevant.

“If I reflect, I would say my biggest lesson is that the more things change, the more things stay the same,” says Wellener. “30 years ago, what we were doing in the shop floor around lean manufacturing and eliminating waste is what we're doing today through the nearshoring work that's going to take place. We're still working to bring things closer together.”

While some things never change, Deloitte is implementing technology in a very different way than it did back when Wellener started in the 1980s.

“We all have mobile devices that have the ability to connect anywhere and have any application on them. So there's a lot of things that are in place today that enable us to do many of those things we would have loved to do 35 years ago. But I'd still say that's the lesson, that the more things change, the more they stay the same.”

Over the next 12 months, what else does Wellener anticipate will stay the same – or change?

“We're very bullish on the opportunities for us to continue to support manufacturers,” he says.

“Deloitte is generally very bullish on the manufacturing part of the economy. There's so much pent-up demand in corporations for capital goods that they haven't been able to get their hands on in the last couple of years.

“There's still pretty significant consumer demand for many types of products out there,” Wellener says. “Manufacturing is going to continue to be strong for the next six to twelve months.”