The journey to utilising 3D printing across the manufacturing space

By Stephen Burrows, Founder of Impex Parts
May 16, 2020
undefined mins 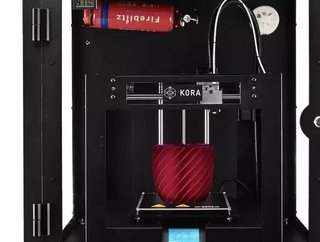 Necessity, they say, is the mother of invention and that is certainly the case with Kora. Founder Steve Burrows was already enjoying considerable succ...

Necessity, they say, is the mother of invention and that is certainly the case with Kora.

Founder Steve Burrows was already enjoying considerable success with his first and long-term venture, Impex Parts Limited, a company that has been supplying OEM and Aftermarket parts to the motor trade for over 20 years. Changes to EU Motor Vehicle Block Exemption had seen demand for "Original Equipment Parts" increase rapidly and Impex was regularly receiving requests for parts that it was finding difficult to source externally.

The company decided to explore 3D printing as a solution and, finding it worked well, went on to own several commercially available 3D printing machines. Initial success soon turned to disappointment, however, when these 3D printing machines began regularly breaking down, requiring Impex engineers to spend a considerable amount of time fixing and maintaining them. Confident in both the skills of his engineers and the technology but frustrated that a better alternative did not seem to exist, Steve decided to develop his own 3D printer machine and Kora was born.

In 2013, Kora became one of the only UK-based manufacturers of desktop FFF/FDM desktop 3D printers. The immediate benefit was that use of the printers ensured the easy and fast printing of small plastic parts – such as clips and prototype automotive parts - for Impex, but the company also began to enjoy considerable success in the increasingly ‘design tech’ savvy education sector with two of its first models, the Alpha and Midi.

Within a year of launching, Kora received an invitation from the Health and Safety Laboratory (HSL), the research arm of the Health and Safety Executive (HSE) to participate in research concerning the emissions/VOCs (Volatile Organic Compounds) generated from all typical desktop 3D printers. Kora pledged to work alongside the HSE on this study and, although it was under no legal obligation to do so, suspended sales of its own 3D printers - and use of its 3D printers for Impex Parts - until the HSE was ready to release its official safety findings.

This was a huge commercial decision, but the Kora design engineers did not remain idle during this time and instead turned their attention to the development of a 3D printing safety cabinet. After two years of testing and utilising different printers at varying temperatures, Kora manufactured several filtration prototypes to address the concerns identified by the HSE. In late 2018, Kora launched the Universal Safety Cabinet SC-01 and was finally able to re-enter the additive manufacturing market again, launching a new range of 3D printers – Kora Pro and Kora Pro PC - for a range of sectors including education and automotive manufacturing.

The safety cabinet was designed to protect the user from both the emissions from the fused filament fabrication (FFF) and fused deposition modelling (FDM) processes used in desktop 3D printers, as well as to prevent any burn and trap incidents associated with this process. It has been designed to accommodate most standard sized desktop FFF/FDM 3D printers and is now the only cabinet to have been officially tested by the HSE laboratory, HSL.

The SC-01 uses a specialist filter cartridge at the top of the cabinet to draw in clean air from the area in which is it situated and to remove a minimum of 90% of known filament micro size particles and potentially harmful emissions from the FFF/FDM 3D printing process. 3D printer Hot-End parts can reach temperatures in excess of 280c degrees and usually include several exposed moving parts, so the lockable cabinet fully encases the printer to safeguard users from any potential burns or entrapment - by fingers, hair etc - while an optional heat sensor, automatic fire extinguisher and LED lighting provide additional user protection.

To provide further protection for users, Kora has also put in place a registration process which tracks the product, its specialist filters and its usage, using unique serial numbers logged on both the product, the filter, the instruction manual and all subsequent filter sales invoices.

Four years later, the HSE is now preparing to release its final report and the impact is likely to be far reaching in what has previously been an unregulated sector. If a business uses or creates substances or carries out processes which might cause harm to health, the law requires them to control the risks. Employers have legal duties under the Health and Safety at Work Act to ensure, so far as is reasonably practicable, the health, safety and welfare at work of all their employees. This responsibility extends to other persons, such as pupils, students and visitors who may be affected by activities undertaken in the workplace.

The Control of Substances Hazardous to Health Regulations (COSHH 2002) (1) requires employers to ensure that exposure is prevented or, where this is not reasonably practicable, adequately controlled and, as a result, the new guidance is expected to require users to pay particular consideration to the location of the printer and recommend that local exhaust ventilation (LEV), such as an ‘exposure control cabinet’, be used. This cabinet should be fitted with an adequate fan and filters to enable the removal of small particles and organic emissions from the melting of the filaments.

Kora believes that the additive manufacturing sector will continue to boom over the next decade, albeit with tighter safety controls and laws protecting individual users. There is the risk that retrospective health issues from additive manufacturing may emerge in the coming years, however with the introduction of the SC-01 safety cabinet, Kora believes it has future-proofed its business model and created a solution for businesses using 3D printers.

Steve Burrows, Managing Director of Kora, said: “It was a huge commitment and a risky commercial decision to cease sales of our 3D printers at a time when we were starting to achieve significant technical achievements and market penetration. However, we strongly believed that although 3D printing delivers huge benefits, not enough had been done at this time to investigate the potential risk to users and bystanders.

“At the heart of Kora is a real passion for problem solving, so our talented team has worked closely with the HSE to develop a product which finally makes 3D printing safe. We anticipate that 3D printing in 2019 will see continued growth and expansion. The technology has already disrupted multiple markets and we expect this to continue. As the only company working with the HSE on a safety cabinet for 3D printers, we believe we are now in a very strong commercial position to ambitiously grow our business.”

Kora is a proud UK manufacturer and a member of the Made in Britain campaign.